In Rome with Mita Medici

The actress following the changes of her city, guides us through Rome, inside and outside its walls. 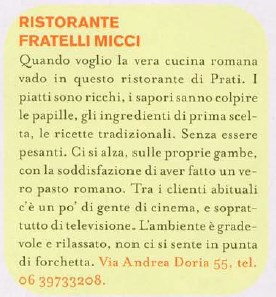 After the death of their parents, Angelo and Marcello Micci faced the choice whether to continue the activity of their family. The two brothers enriched the culinary experience, without turning their back on tradition.

And here on the tables, served with warmth and kindness, you’ll find rigatoni with carbonara, the onion soup (French, because Angelo spent plenty of time in France), cod with raisins. Potato dumplings on Thursday, fried squids and lattarini. And every Sunday, lasagna, highly appreciated by customers. As well as clients appreciate the tenderloin with green pepper or over toasted bread (bread, special sauce made by the chef and a slice of ham), noodles with seafood, winter stews, saltimbocca alla romana, gratin anchovies baked. What’s more, there is a wide choice among delicious desserts, such as: apple pie, strudel, tart cherries, crème brulée and chocolate soufflé.

No flights of fancy from Micci, in Prati district, but there is the feeling of staying in a safe refuge. There is anything about classic tavern cuisine, including a few forays into the recovery plates (the exquisite sprightly soup), and a pizza made in a wood oven.

Beneath most restaurants (not each of them) there is a story. And not all of them (on the contrary, perhaps only this one) have framed the passport of a dead man: the passport number 4156796/P, belonging to Piero Ciampi, the song poet with the halo of “maudit”. As another out of the pack, Giancarlo Fusco, was among the regular customers of this restaurant in Prati district, and most of times he didn’t pay. Armando Micci, from Ancona, opened in ’60, the year of the Olympics, with his wife, Valeria, in the kitchen. The sons Angelo and Marcello, by time followed different ways. When they inherited the local (1990), gave it in management. One directs the Cit in Paris, the other is St. Laurent Sales Manager for Italy. But it is as if they had a bone in their throats. In fact, they had given up their jobs, thus have taken back the local, have had it restructured and have been relying on a skilled chef. Great attention to the raw material (buffalo mozzarella, only from Mondragone; tomatoes, preferably, only by Pachino, black olives, only from Gaeta) and recovery of mixed clientele: the Sunday families, who do not lose the lasagna, Rai’s employees, moreover painters, musicians, actors. Otherwise you just may have a pizza (good, wood oven): Margherita with buffalo mozzarella. More fish than meat, especially in summer: Strozzapreti lobster, rigatoni with clams and raw peppers (respectable even simple ones, tomatoes and basilic), fish soup (on reservation, the same goes for pajata and tail). And then fried fish, turbot with potatoes, sea bass in salt. But also: roast suckling pig, saltimbocca alla romana, meatballs. In short, a no-nonsense cuisine, with a few flourishes, in a friendly environment and until quite late. The wine list will be improved, although some recent entry (Montiano) led to a certain hope.